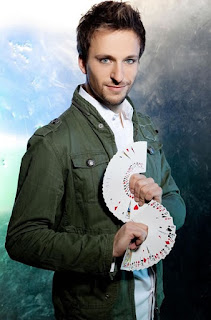 Exposure and all.... well I won't go on a rant here that exposure is bad and in no way is doing a service to magic. Nope not this time. But let's talk about a few different kinds of exposure.

Exposure by default: Is done if you have to expose the modus operandi of something in order to make a point that otherwise wouldn't be understood. A magic example would be a second deal demo. The point that is to be made is that how skillful gamblers cheat. If you tell them without showing it would be unsatisfying.

Necessary exposure: If the method of the trick is actually far more entertaining than the effect. That it is necessary to expose the method. This usually preludes a sucker effect.

Exposure to create an even bigger illusion: A nice example is the showing of the key ring in a linking rings routine and to throw it away saying: "I don't need this crook!"

And finally the good old mean spirited exposure. This is where we meet Peter Valance. A German magician who is slowly crawling up the ranks. In fact he seems like a nice guy with skill and all the razzle dazzle that one would need to be up there. So what happened?

Well he was basically explaining the good old balloon trick on national television. You know the trick that is currently sold as "Pressure". That in itself is not too much of a horrible, horrible thing to do, but the way Peter Valance did it, was below anything that a man of his caliber would do. He basically performed the effect which got good reactions. Then the host asked him how he did that. So he explained it. But the explanation wasn't funny, nor entertaining in any way. It was just "oh, simple, just do that."

The exposure left the magician with no dignity. Suddenly the skill/magic was reduced to something that wasn't skill or magic. It left the magician with a classic "oh, that's how... how pathetic" reaction by his audience. The whole exposure did a huge disservice to magicians all around. Even those who do not actually do that trick. (those are fucked the most of course) Basically Peter Valance openly told everyone via subtext, that being a magician needs no effort, no skill and no magic. Thank you Peter Valance for thinking it was a good idea to expose the trick....

Here is what you should have done, according to my little list. You could have either done the necessary exposure route or the exposure to create an even bigger illusion. Both would start with the performance of the balloon trick, then the exposure and then you would throw away the balloon saying "I don't need this crook" and then blow up a new balloon and really put the cell phone in the balloon. Suddenly you would have combined a sucker effect with an entertaining premise and you would have created a greater illusion. As a nice side note you would have left all the magicians with dignity a hint of mystery and an aura of the awesome.

Unless of course it was you plan to tear down the image of the magician and show them as what they really are. In that case no problem.... save one: That's my job!
complaints go to Roland

Thinking with the wallet and not the brain!!

Danny Garcia is one of the nicest magicians in magic, what gives this prick the right to expose pressure? whats next, he'll explain Sinful?

The Idea of Exposure as in making it (Pressure) a sucker Trick and coming out with a real kicker is actually absolutely great. People could actually be inspired to dive deeper into the materia. He should have done that.
(But yea, he fucked up).

I do really disrespect "Magicians" who expose, because of 2 basical reasons imho:

I sense 2 kinds of audience mostly
1. The One Type that can be really PISSED at how "easy" the secret and mechanics behind it is, which ends up in pure disappointment, about themselves (not figuring the shit out) or being disappointed by the magician because that asshole (of course) fooled them. then it is not entertainment anymore.

2. The Type that likes Magic even after you exposed something to them, but they would often go, ´show me another one, this is cool...´ they do appreciate it, but they simply don´t ever again want to know how it works (speaking of experience by exposing a trick to a friend.)

So these are the main Types you simply ruin it for. Which sucks, because noone gains ANYTHING from it. Zero.
And those exposing to the public are not real magicians to me, because they simply DO NOT live it (they make a living though), and their "passion" about it is simply not authentic.
Nothing against exposing a BarTrick, or guiding someone to a Magic shop or whatever, you know what I am talking about.

Another guy per example is this Goofy right here
http://www.youtube.com/user/howtoDisturbReality/videos?view=0

Why?
Because he just doesn´t give a shit. That is how i see it. Someone who is especially exposing the Double Lift (hello... you basically expose 100s of card tricks once the audience knows about it), the Invisible Deck, The Raven.. just to mention a few, is a bad choice i find. Not only that, putting it on YouTube with ADs and making money by having people click the video is just lame. And then telling me like "others on youtube reaveal these kind of things, too so why shouldn´t I". Yea.. i tell you why because these are classics and it doesn´t matter how less or many people see your video, you simply ruin it you sack of shit.

so that´s my basic opinion, sorry for my english here and there (germany).