The power of a running gag 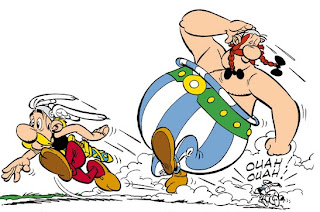 I've been creating, working on and playing several shows lately. Several close up magic shows. Not just a bunch of tricks strung together for 5 minutes, but real shows. One is 90 minutes in length and one is 70 minutes and another one is 50 minutes.

I realized that a running gag really helps tying the show together. More so than the over arcing theme, atmosphere and the premise. Sad thing actually.

Maybe I should specify it a little more. I'm not talking about a comedic running gag, but a magic running gag.

Some of you may know the "Water from India" gag, where water appears from a bowl which is emptied and then set aside. Later it has more water and everything is repeated. I rarely see a good magic running gag. A running gag should have a payoff. In the Water from India gag the usual payoff is that the second bowl the water is poured in is tipped over in the end, to reveal no water or confetti.

Here is a simple example you can use yourself: Have a card picked in the beginning, then signed then lose it in the deck. Say that you will make the card go to your left pocket. You reach into your left pocket, but it's the wrong card. Everybody has a laugh, but you don't give up. You claim to try again... later. Then continue with your show. Later you reach for the pocket and again produce the wrong card... you see where this is going? Just keep doing this to tie together your act. In the end you find the card in a spectacular fashion of course.

Or borrow a bill in the beginning. A large bill. Fold it a few times then unfold it and it is a smaller bill now. Offer to reverse it.... but instead it is even smaller. Put the bill away telling your spectator to come back to it. And you do come back to it. A little bit later. But it gets even smaller. Eventually the bill becomes a coin and even the coins gets smaller. In the end you produce the first bill and give the coin and the bill to the spectator. All of that has great comedy potential and great audience interaction.

So you see basically a running gag could be just a multiphased routine spliced apart by time. Try it and improve your magic show.

Email ThisBlogThis!Share to TwitterShare to FacebookShare to Pinterest
Labels: tip

Always amazed how they mess up the simple things

Apparently it is!
complaints go to Roland No comments:

Email ThisBlogThis!Share to TwitterShare to FacebookShare to Pinterest
Labels: WMF

That's how a PK-ring is used

Email ThisBlogThis!Share to TwitterShare to FacebookShare to Pinterest
Labels: Random

Let's assume you have created a wonderful piece of magic and you want to release it, because you really need the money. Let's further assume you find a company or a magician who is willing to sell your creation using their store or their name. And let's even assume a little more... that the item is a real big hit.

Now technically the pressure to come out with a second product is really, really high.

Many fall for that pressure and the second item often is: Badly constructed and/or stolen and/or be totally unoriginal.

Don't fall for it!
complaints go to Roland No comments:

Pro Tip For You Mentalists!

When having a dummy inside a sealed envelope that leads to a headline prediction, at least have a fake prediction inside. If you do any publicity it could happen that the authorities that you hand the envelope to are means spirited and open up the envelope in your absence.

If they do, better have a headline written on the paper inside. You can claim afterwards that because they made it public what was inside the headline was changed, as the future was altered.
complaints go to Roland No comments:

Email ThisBlogThis!Share to TwitterShare to FacebookShare to Pinterest
Labels: tip

We all know how creative acts are coppied over and over again. But I love how in the same show they copy themselves. Same dramatic build, same effect, same aftermath.


There are more examples

Email ThisBlogThis!Share to TwitterShare to FacebookShare to Pinterest
Labels: WMF

Has Jesse Feinberg ever released a product that is any good?
complaints go to Roland 1 comment:

Email ThisBlogThis!Share to TwitterShare to FacebookShare to Pinterest
Labels: question