So we got this cool little gimmicked wallet. What do we do with it? Card to wallet... yeah how boring. Here is an idea to spice it up, possibly being a prelude to the card to wallet. 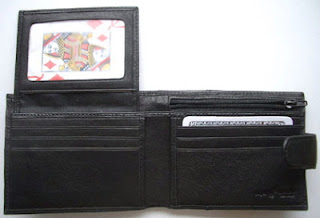 Have the wallet in you left inside jacket pocket. Borrow a finger ring and remark it's beauty. Do not make cheap jokes about it. People might chuckle, but they won't like you! The vanish the ring. Anything by Gregory Wilson is nice. Show your hands empty and then get out the wallet. Open the wallet and reach through the zipper compartment to the outside and pull in and then out the ring.

If you do card to wallet anyways here is my little addition, even though a few bits need to be figured out. Open the wallet and show a face down card in one compartment. It's one of those wallets where a transparent window let's you see what is there. Usually for drivers licences and shit. But in this case you see the back of a card. Leave the wallet open as you have a card selected and signed. Free choice of course. Then the usual shenanigans and finally the card is vanished. You claim it's the card they've been staring at the whole time. Cleanly you pull out the card with no funny moves and it really is the card. The method is nothing but a combination of two gimmicks. One is the wallet and the other one is the transparent window in the wallet. It's basically the face down version of the Wow 2.0 gimmick by Masuda. So before any card is in the wallet the gimmick poses as a card. And once the card is in the wallet the gimmick becomes transparent. Now you got a miracle.

Do not load one card, load more than one. It is much stronger.

Borrow the business card of a spectator... look at it, wondering, then saying, "have we ever met?" Then reach for your wallet and inside there will be the same business card. Looking back at the first business card is has now become your own business card which you hand to the spectator. Do I need to tell you how commercial that is?

Have you ever played around with the option of stealing stuff from the wallet as well. That opens up room for transpositions and all of that fun stuff.
complaints go to Roland

The WOW idea is brilliant! Thanks for sharing!

Roland, you got a good thinker, that's for sure.

Excellent combination make a card to wallet trick much, much stronger. I wonder how people will be amazed an empty, open transparent wallet compartment has a card materialized inside with no funny moves at all.

I think once it is materialized, you took the wallet and not even need to load the signed card, just controlled the signed card to the txx of the deck and pxxx it out, then you know the rest.

Roland, you are just freaking brilliant!